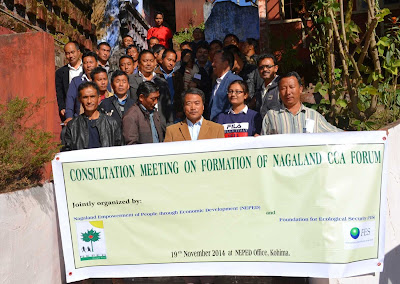 The state of Nagaland lies within the Indo-Myanmar Biodiversity hotspot, and illustrates unique a rich biodiversity of endemic flora and fauna, of which many are considered rare and endangered. In acknowledgement of the importance of the natural resources, the communities of Nagaland work together to protect and conserve their biodiversity, which resulted in the formation of the many Community Conserved Areas (CCAs) in the state. During a consultation meeting, a group of CCAs identified the need for a common platform for the mutual exchange of knowledge and ideas, support in terms of skill building and other aspects. Most importantly, it was there was consensus on the need to have an outlet for a common voice for all the CCAs in the state, for recognition and policy influence and also for the representation of community initiatives at various national and international platforms.

At subsequent consultation meetings and deliberations during November 2014, the Nagaland Community Conserved Areas Forum was formally established with a total 22 affiliated CCA members. A core committee was formed to draft the constitution and with the consent of all the members the constitution of the Nagaland CCA forum was adopted.

Our Vision: A green Nagaland with rich biodiversity

Nagaland Community Conserved Areas forum is a platform created by the CCAs of Nagaland with an intend to share their learning, experience, challenges and raise CCAs voice at different forums.